Yesterday the boyfriend and I went to Manhattan to see the Empire State Building! Or we were supposed to because we’ve had tickets for over and year… but I walked out the door without them.

Instead, we met my dad at the Bryant Park Grill for a fancy lunch. I had a stir fry salad, which was good, but the best part was dessert. Behold, the Chocolate Peanut Butter S’more:

So we didn’t have a plan, but since the New York Public Library is right behind the grill, we decided to go there. It is a beautiful building inside and out.

They have a great exhibit going on called The ABC’s of It: Why Children’s Books Matter. It was a great look at what books teach children, and it made me pretty nostalgic. You can see things like the original Winnie the Pooh stuffed animals, a life-size setup of Goodnight Moon, and art inspired by different stories like Where the Wild Things Are.

Here I am with Eric Carle’s walrus from Polar Bear, Polar Bear

After the Library, we went back to Bryant Park and watched some intense ping pong! Thanks for an awesome day Jack! 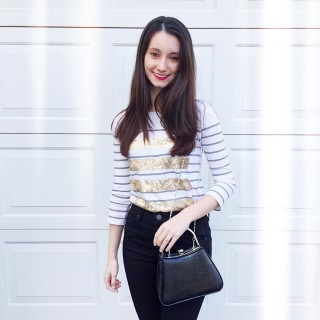 I am a recent graduate of Muhlenberg College with a BA in English and dance, and am now pursuing a certification in Event Planning! I am a sister of Delta Zeta, and love crafts, scrapbooking, and fashion! This blog is my mission to discover what I love and why, and hopefully this will help point me in the right direction for what I want to do... and encourage me to have more fun!

The only boy that can get me out of the house when it’s 9am and 20 degrees ❄️💕🥶🐕 #mommyandme #dogmom
😂🐕😭 #longboi
Maybe the best thing I’ve ever made, inspired by my favorite thing @bad.ju.ju has ever made 💕
Oh what a night 🥂 (@garyflomphotography)